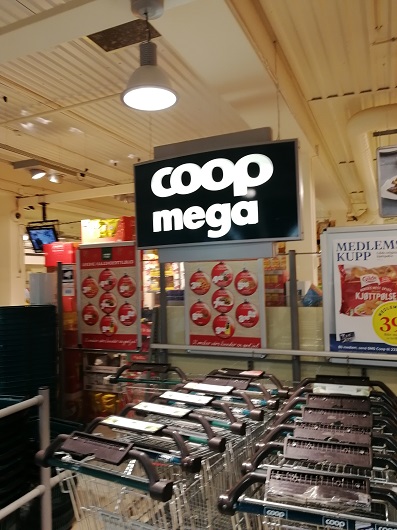 The above photo is from my local co-operative store, Coop Mega, a chain that is operating all over the Nordic countries and is majority owned by the consumers – Anyone can become a member (owner) and get kickbacks from the profit the stores make, which means the retail-stores relying on the game theory principle of “Positive Feedback loop”.

The former version of Coop, Konsum, was a much larger company and had its own industries (farmers, packing factories, slaughterhouses, etc) but due to the financial crisis back in the 1990s the co-operative decided to focus mainly on the retail side of things to get its overhead spending under control, sold out everything but that part of the business strategy, and that is the version that survived to this day.

The Norwegian side of the business had a hilarious commercial last year mocking entrepreneurial American hipsters, watch it for a good laugh (it’s in English, look here for part 2 where they visit Norway and discover they have been late for about 150 years with their idea).

Why am I telling you this, seemingly random, story? Well, I wanted to make this article ever since I heard Rollo and Flappy Show episode number 120 – Should We Be Strict Capitalists? Their guest Dean-o-File, someone I’ve followed for quite some time and listened to his podcast for a while now, expressed some things that weren’t sitting snuggly with me and I needed a few days to ponder the premises. Dean made an article denouncing his capitalist past and the result from that article was his appearance on the Rollo and Flappy show, where he explained his position in the article a little closer.

I want to break down some of the finer parts and present my counter-arguments to the premises given in both the article and the podcast episode.

1. Property is different in Socialism and Capitalism

I found myself mentally railing against businesses and organizations that incorporated decidedly socialist ideals. The flat management structure of Valve Corporation, worker-owned cooperatives found in the engineering and manufacturing fields, agricultural production cooperatives where production and even, God forbid, machinery is pooled among the members. This drove me insane.

People owning things together is not Socialism per se, I don’t even think a feverish Rothbard would make that sort of claim.  It’s along the lines of some Anarcho-communist stating that non-left anarchists are living oxymorons and claim the anarchic ideal for themselves, while continuously oppressing individuals under their backward view on property rights to the point where the aspiring Reddit-communists need clarification on what is private, personal and public property to full-on absurd levels.

Private property, homesteading principles and other concepts close to these ideals are capitalistic and libertarian in nature, it looks completely different under Socialist/communist world-view and diffusing “people that shoulder the cost of machines together” as inherently socialistic is counter-productive.

Just because people pool together resources and call themselves socialists to feel nice, doesn’t necessarily make them actual socialists. Co-operatives don’t need to be socialists, as my opening Coop example shows. The view of property is at the forefront, in my mind.

I now live in a suburban area of that same town, and I am still served by an electric cooperative. I’ve spent my whole life benefiting from decidedly socialist structures at fair-to-middling prices and I still, somehow, railed against them.

Socialism and capitalism are the modes of production (and principals of property) that brings goods to the markets, markets in themselves need to obey the modes of production. Under a socialist rule of countries, there is a significant part of the market that is black market – Stories of how kids bought Lewi’s jeans and coca-cola in some shady back alley deals is plentiful. The Silk Road was a black market in the crony-capitalist United States. Polish and Swedish smuggle cigarettes in mixed-economy Norway is a booming black market.

Any type of oppression on the “Free Market Inc” will funnel people into alternative markets. Both I and Dean agree on this in principle, what we seem to disagree on is what profit is. He mentions both in the podcast (briefly in his article, but much more detailed in the podcast episode) about this cooperative electric company that makes little-to-no-profit on churning out electricity to the local community, even stating that there was no profit for any of the larger, alternative, electric companies so they didn’t open up shop in the area and thus the need for the local co-op to do it instead.

This is a textbook example of Carl Menger Subjective Theory of Value.

Small, local hydropower plants are quite common in Sweden, for example, and very lucrative to set up and get going if you do it right – A friend of my father makes a “passive” income of about $55k per year on his low-maintenance power plant.

Believing small firms equals some sort of antithesis to capitalism is a slap in the balls to critical thinking. Calling this simply “The Market” ignores the mechanics behind it completely and goes directly to the (wrong) conclusion, in my opinion.

God knows I’ve doubted capitalism for 20-something-years, but I’ve always strived to at least use proper terms over mashing things together in an unrecognizable concept.

Dean, Rollo, Slappy, I am open to talk about these things on any of you guys show, my DM inbox is open on Twitter.